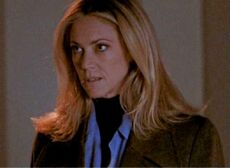 Dr. Samantha "Sam" Waters is the main character on the TV series Profiler. The actress Ally Walker who played Samantha Waters, had a guest appearance as her Profiler character in The Pretender episode End Game. This led to the first of The Pretender/Profiler crossover episodes.

Best referred to as Sam Waters, is a forensic psychologist who has a tragic past with serial killer known only as Jack of All Trades.

Retrieved from "https://pretender.fandom.com/wiki/Samantha_Waters?oldid=7240"
Community content is available under CC-BY-SA unless otherwise noted.