Betrayal is the fifth episode of the third season of The Pretender which first aired November 14, 1998 on NBC in the United States.

Broots is on the run as The Centre suspects him of being the source of a leak, and Jarod helps Broots find out the truth of a former Centre Operative at the heart of the trouble. Miss Parker shows surprising loyalty to someone who means more to her than her own "flesh and blood" brother, Lyle.

The episode showcases a bit of Broots' paternal side opening with a heartfelt scene between Broots and his daughter Debbie. Miss Parker interrupts with bad news of a leak that Broots has to investigate at the Data Annex before he goes into The Centre. Broots goes to the Data Annex and disaster ensues. Broots is on the run as The Centre invokes a Schedule 7 making Broots "persona non grata" until they get to the source of the problem.

Broots, worried for the safety of his daughter arrives at her school just in time to see Miss Parker take her into a car. He goes home to get his handgun, and finds Jarod there. Jarod promises to help him and they are shot at while there.

to Broots that a former Centre operative, Damon is working with someone at The Centre. Miss Parker reports Debbie's safety to Sydney as Lyle walks in and explains to them that Broots lives or die on his own until the matter is resolved.

Broots and Jarod return to the Data Annex to find out how to stop any further damage by Damon using the stolen information. While they are accessing the system, The Centre personnel who are tracking activity discover the system is being accessed and Miss Parker demands that they get in touch with the security in charge. Jarod and Broots manage to escape without too much trouble from the guard, and when Miss Parker shows up at the Data Annex, they have already left with the DSA.

eports to Lyle what she discovered at the Annex, however he is less than impressed. Miss Parker is unmoving, probably as she believes Lyle is being counter-productive by not including Broots in the search to find out what is really going on. Sydney witnesses a brief part of their conversation and comments,

"I believe the two of you are taking the concept of sibling rivalry to new levels." Sydney

Miss Parker leaves without her usual one-line zinger and Sydney takes a look at the information she brought back, then calls Jarod & Broots to alert them. Sydney warns

Jarod to not let his desire for revenge (against Damon) destroy him. Jarod vows this time he was going to stop Damon. Broots and Jarod figure out the meaning of the code. Miss Parker busts Sydney with a recording of the phone call he made to Jarod. She is angry with him and appears not to realise that Jarod is working with Broots to help him. Sydney explain

s the situation of the former Centre Operative gone rogue, who broke Jarod's trust, showing Miss Parker the DSA of Damon betraying Jarod in the worst way possible, using an innocent victim, Kenny, (who was a friend to Jarod,) to teach Jarod a lesson. Miss Parker understands that Damon has to be stopped "...for good." Jarod and Broots trail Damon and then Jarod confronts him, demanding at gunpoint, that Damon give him the case (with the virus Damon was planning to unleash on innocent victims). Damon taunts Jarod with his humanity, betting that Jarod can't shoot him.

Damon pretends to walk away and then turns around and shoots Jarod before he can react then escapes with the case. Broots helps Jarod,

bandaging his gunshot wound. He insists on asking Jarod again what happened between him and Damon. Jarod tells him it's all on the DSA. Broots then tells Jarod he thinks Damon's pattern is probably political/global and as Jarod turns on the TV the news report leads them to figure out the target.

Miss Parker reports to Sydney they have found where and when Damon will strike, and they head off in the Centre's jet. Jarod and Broots walk in on an interfaith service as they try to figure out how Damon will deliver the virus. When they spot Damon, and realise he would be using aerosol delivery Broots tries to get everyone to leave by announcing there is a bomb in the building. Jarod confronts Damon again and Damon tries to use Broots against him this time.

"I believed you once." Jarod

Jarod tries to reason with Damon but Damon is as uncaring as before.

"He has a daughter, who needs him." Jarod

"It doesn't make a difference." Damon

Jarod shoots Damon point-blank as he is holding Broots hostage and Damon goes down. Broots is finally reuinted with Debbie, who was passing her time playing Checkers with Sam. Miss Parker is stoic and leaves without a word after she has witnessed their reunion. Back at

the Centre, Sydney gets a call from Jarod who is struggling to come to terms with what has happened.

"I never pulled a trigger before." Jarod

"I just keep playing the moment over and over in my head." Jarod

"You have to forgive yourself Jarod." Sydney

Sydney tries to comfort Jarod, but Jarod does not appear very comforted. He hangs up and takes out a paper swan he had saved that Kenny had made for him. 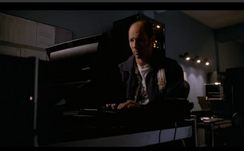 Broots working on detecting the source of the problem

Kenny shown on the DSA

"It's bad enough that you talk to yourself but in in a second language?" Miss Parker

"I can't believe you weren't spawned under some rock instead of being born of the same flesh and blood I came from." Miss Parker

"She doesn't have it in her heart, or in her eyes." Jarod

"I remember everything." Jarod

Community content is available under CC-BY-SA unless otherwise noted.
Advertisement